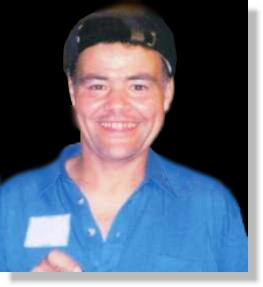 The last time Kent’s Mother saw him was on Sunday March 10, 2002. He peeked in on her in the den. Shortly after that he left the family home to visit his old neighborhood, approx. two miles away. This was something Kent enjoyed and had done for the past 25 years.

He was last seen at 5:00 p.m. that Sunday, wearing a Harley-Davidson sweatshirt, blue jeans and black Reebok sneakers in the Colonial Heights area of Hope Mills, North Carolina.

When he did not meet his 5:00-6:00 p.m. curfew. His mother, after speaking with her daughter in Seattle, contacted authorities. Kent's younger sister knew that something was terribly wrong! Her brother had a routine and that routine was disrupted. He had never been late for curfew.

Kent has mental retardation and would not have the intellectual capacity to initially sense danger.

The authorities have been searching for Kent, but continue to hit dead ends. He disappeared only a few yards from Interstate 95, which is a major interstate that stretches from New York to Florida.

The Jacobs Family has a Web Site set up with information, photos, missing poster, and an email letter you can send out to all your friends and business associates. Please visit the Web Site and see what you can do to help.

If you believe you have seen Kent Jacobs or
have knowledge of his disappearance, please contact:

Newest Information: When Kent vanished from Hope Mills, NC on March 10, 2002, the last known sighting of him was around 5:00pm walking alone through a neighborhood near his home.

Thirteen months go by and finally people are just now coming forward saying they saw Kent at a BBQ as late as 8:30pm that evening and saw him get into a car with two characters named 'Little Hennie' and 'Peanut'.

Roughly fifteen people saw Kent at the BBQ is the initial report that came in just this past April 21st. As of this writing, the Jacobs family has spoken to three of the fifteen and they all say the account of Kent being there at the BBQ at 8:00pm is accurate.
Posted by Donna G. Smith at 1.5.07